Programming the MP3 controller/player: getting started

Programming the MP3 controller/player: getting started

This is a step-by-step guide for programming the H0420 MP3 controller/player. It uses a few very simple scripts to demonstrate the software tools that come with the H0420 device. On many of the subjects touched upon in this article, you can find more information in the various guides that are also included with the H0420 software package.

The H0420 comes with a CD-ROM that holds, among others, a setup program for Microsoft Windows. The first step is to run this setup program and follow its directions.

After the installation completed, you will have a new group below "Program Files", called "H0420 MP3 Controller". From this group, choose the item "Pawn IDE (Quincy)". If all is well, the following screen pops up. 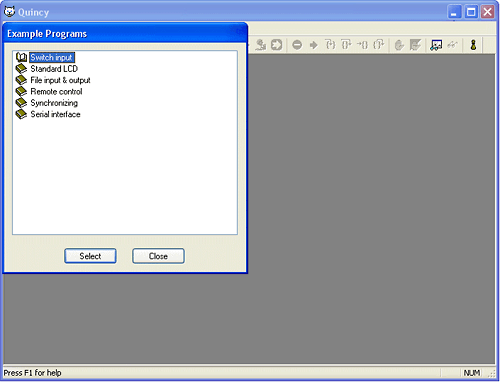 You can close the "Example Programs" dialog. In this tutorial, we will write our programs from scratch rather then basing them on an example.

Assuming that you have Quincy (the pawn IDE) in front of you, follow the list of steps below to create a script that plays a track in a loop.

Unlike retail MP3 players, the H0420 MP3 controller has no hard-wired functionality for playing MP3 files; it needs to be "told" what to play and when. You tell the H0420 how to behave via a programming language. In the above example, we have made a simple, a very simple, program.

Actually, saying that there is no hard-wired functionality in the H0420 is not quite accurate: in absense of a script, the H0420 will play all MP3 tracks that it finds in the root directory of the CompactFlash card in random order. That is all that it does. To make the H0420 do anything else, you must add a script.

Before the H0420 MP3 controller can run this program, the program must be compiled. This is because computers and devices like the H0420 only understand "machine language". You, however, would not enjoy writing the programs in machine language —trust me on this. Therefore, a compiler translates from "human readable" source files, with instructions that sound like English words, to machine language.

When you switch on the power, or insert a CompactFlash card into the H0420, the MP3 controller resets and starts running. The reset starts with a self-test, which takes two or three seconds, but after that, the H0420 executes the "reset" event in the script. For reasons internal to the pawn language, all event names start with an "@" symbol, so the reset event is actually called "@reset". Also, the event specification must say what its parameters are, between parentheses behind the event name. The reset event has no parameters, but the parentheses must still be preset. This is how we get to the full event name specification @reset(), which is the top line of our script.

The above script is indeed simple. Most users, though, want a track to be activated on a sensor or a switch. For the next switch, we will implement the following functionality:

See below for the script for this functionality. In Quincy, you can create a new file and copy the script from this document into that file. Then, you can proceed as for the first program. When testing the script, you need to connect two switches, though. But before that, I will explain how the script works.

We need no activity on reset (or start-up), so we do not need to implement the @reset() at all. Instead, there is a new event function: @button() that, as you may guess, fires at each switch press and switch release.

If you are asking yourself why the "switch" event function is called @button() rather than @switch(), it is because switch is a keyword in the pawn programming language.

Function @button() takes two parameters: pin is the sequence number of the switch, from 0 to 15; status is 1 (true) if the switch is pressed and 0 (false) if it is released. If you are new to programming, it may look strange at first that computers (and programming languages) start counting at zero instead of at 1, but you will get used to it quickly.

As before, all instructions for the @button() function are between curly brackets. In fact, there is only one instruction attached to @button(): an "if" statement. The other lines are sub-statements of this if statement. It is good practice to show the hierarchy of statements with the level of indenting (from the left margin).

I could have used another if statement to test whether it was switch 0 or switch 1 that got pressed, but for variation, I used the switch statement here. The switch statement is more easily extendible when you add more switches, because you may add an (almost) infinite number of "cases". 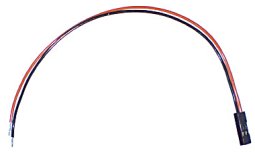 To test this second script, you need to connect a pair of switches to the connector block that the "User Guide" and the datasheet refer to as "J5". J5 is a 34-pin IDC connector, suitable for ribbon-cable and for crimp-sockets. When connecting just a few switches, a set of 2-way connector cables like in the picture at the right is often convenient. In the picture below, two of these connector cables are plugged into J5 at the positions for the first and second switches. Each cable pair has a simple push-button switch at the other end. 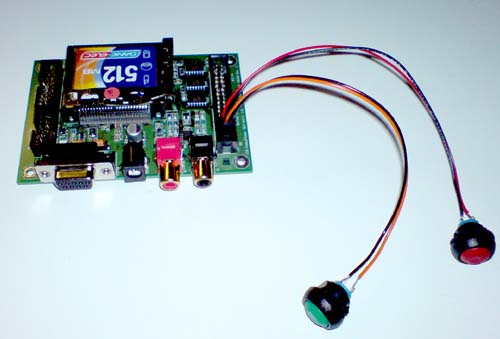 Once the switches are connected, and the CompactFlash card holds the script and the MP3 tracks, you can power up the H0420 MP3 player and push either switch to start one of the tracks.

Where to go from here...

The very first program developed in this article is so simple that you may take the syntax rules at face value and understand what the program does. The second program already requires that you understand the basics of programming and of the pawn language.

The tutorial in the Language Guide does not contain any specific information related to the H0420 MP3 controller/player. However, the H0420 Reference Guide has its own tutorial introduction. More detailed information on specific topics is assembled in "application notes" for the H0420. Most of these notes are fairly advanced, though.

And finally, the Quincy IDE comes with various example programs. It is likely that one of these comes close to what you want to do with the H0420. You can get the list of example programs by choosing the menu Help, then item Example Programs...